This replica was constructed in Queensland and flown to Darwin in a RAAF Hercules in October 1991.

Mk Vc Spitfires of No 1 Fighter Wing took over the defence of Darwin from the RAAF Kittyhawk Squadrons in January 1943. The Wing, sometimes called the Churchill Wing, consisted of 452 and 457 Squadrons RAAF and 54 Squadron RAF. They were later equipped with MkVIII Spitfires and eventually over 300 Spitfires operated out of Darwin accounting for many Japanese aircraft destroyed.

The replica was originally painted in the colours of Group Captain Clive Robertson Caldwell, Australia’s most successful fighter ace and leader of No 1 Fighter Wing. After 13 years and many moves to air shows and other display locations the replica was fully refurbished and given a new colour scheme.

Spitfire Mk VIII (Replica)2017-04-202017-04-20https://www.darwinaviationmuseum.com.au/wp-content/uploads/dam_logo_web.jpgDarwin Aviation Museumhttps://www.darwinaviationmuseum.com.au/wp-content/uploads/spitfire_blog.jpg200px200px
Categories
About Us
The Darwin Aviation Museum is an accredited tourism attraction with award winning displays. With 19 aircraft, 21 engines, 38 major displays including relics of crashed aircraft it depicts the aviation history of the Northern Territory.
Contact Us 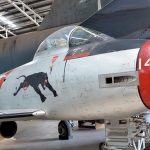 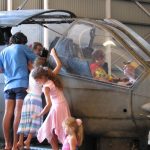