This aircraft was built in Darwin by Ron and Annabelle Lawford. Construction commenced in late 1983 and the aircraft’s first flight was 29th December 1986. This aircraft has flown over 1450 hours to all locations in Australia. It was the second to be built in the Northern Territory.

See description of the aircraft on Wikipedia.

Rutan Long EZ2017-04-182017-04-20https://www.darwinaviationmuseum.com.au/wp-content/uploads/dam_logo_web.jpgDarwin Aviation Museumhttps://www.darwinaviationmuseum.com.au/wp-content/uploads/rutan2r-e1385469228842.jpg200px200px
Categories
About Us
The Darwin Aviation Museum is an accredited tourism attraction with award winning displays. With 19 aircraft, 21 engines, 38 major displays including relics of crashed aircraft it depicts the aviation history of the Northern Territory.
Contact Us 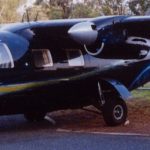 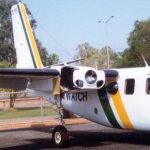