This 600 HP  9 cylinder radial WASP engine used originally in a Lockheed Vega & Express of 1928. It was also used in WW2 training aircraft.

This engine was installed in a NOORDUYN NORSEMAN  ex RAAF A71-14 – the first NORSEMAN  to put on the Civilian register.The  aircraft was  destroyed by fire from a spark from a HF antenna. A notable NT  identity was wrongly accused of the fire because of his cigar smoking!

More about the technical details of the Pratt & Whitney 1340 Wasp Engine can be seen in Wikipedia. 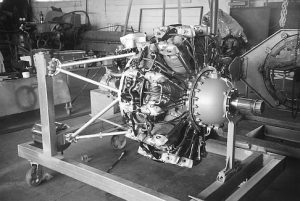 Pratt and Whitney 1340 Wasp in Workshop

Pratt & Whitney 1340 Wasp Engine2017-04-152017-04-20https://www.darwinaviationmuseum.com.au/wp-content/uploads/dam_logo_web.jpgDarwin Aviation Museumhttps://www.darwinaviationmuseum.com.au/wp-content/uploads/dam_logo_web.jpg200px200px
Categories
About Us
The Darwin Aviation Museum is an accredited tourism attraction with award winning displays. With 19 aircraft, 21 engines, 38 major displays including relics of crashed aircraft it depicts the aviation history of the Northern Territory.
Contact Us