See the F111 all weather strike fighter/bomber with following features, viable geometry wings (swing wing), internal weapons bay and gun, terrain following radar and side by side seating within a escape module. The RAAF used the aircraft primarily as a bomber. Later in life a number of these aircrafts were converted for Photo Reconnaissance Role. Our aircraft A8113 was delivered to the USAF(US air force) and departed for service to Vietnam in 1973 and flew 44 combat missions and is now shown repainted at in its original South East Asia camouflage with 1 Squadron markings on the port side and 6 Squadron on the starboard side.

Read more about the F-111C, how it got to Darwin and it’s history here.

F-111C Strike Fighter2017-04-102017-04-20https://www.darwinaviationmuseum.com.au/wp-content/uploads/dam_logo_web.jpgDarwin Aviation Museumhttps://www.darwinaviationmuseum.com.au/wp-content/uploads/f111_darwin-1.jpg200px200px
Categories
About Us
The Darwin Aviation Museum is an accredited tourism attraction with award winning displays. With 19 aircraft, 21 engines, 38 major displays including relics of crashed aircraft it depicts the aviation history of the Northern Territory.
Contact Us 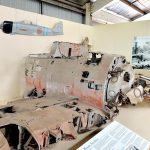