The Great Air Race from London to Darwin

Join us on Sunday Sunday, 22 September between 9am and 3pm at Darwin Aviation Museum as we celebrate the Race that Changed the World.

The day will begin with the reveal of a new façade honouring the winning plane and join in the fun as we share the incredible story of the Great Air Race with the wider Darwin community.

The façade reveal will be part of the museum’s ‘celebration of aviation’ and the public is encouraged to come along to this family event and access the museum for a ‘gold coin donation’.

“The Great Air Race represents a significant time in Darwin’s history and it is very important that we celebrate and commemorate this ground-breaking aviation milestone in its 100th year.

“The foresight and achievements of aviation pioneers not only opened Darwin to the rest of Australia and the world but also gave greater connection to remote outstations and communities of the Northern Territory, which really drove the Territory’s future development.

“Our façade launch event will be the perfect opportunity for all Territorians and visitors to join in the family fun and learn more about the incredible journey that was the Great Air Race.”

The Great Air Race from London to Darwin2019-08-142019-09-07https://www.darwinaviationmuseum.com.au/wp-content/uploads/dam_logo_web.jpgDarwin Aviation Museumhttps://www.darwinaviationmuseum.com.au/wp-content/uploads/vickers-vimy-landed-in-darwin-winning-the-great-air-race-from-london-to-darwin.jpg200px200px
About Us
The Darwin Aviation Museum is an accredited tourism attraction with award winning displays. With 19 aircraft, 21 engines, 38 major displays including relics of crashed aircraft it depicts the aviation history of the Northern Territory.
Contact Us 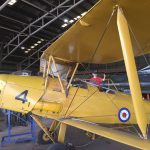