Made under licence to the North American Company by the Commonwealth Aircraft Corp, but using the British Rolls Royce Avon RA7 axial flow jet engine of 7500 lb thrust. The aircraft was noticeably faster in climb and top speed than the US version. To fit this engine the fuselage had to be deepened and modifications to the tail design. The armament was changed from the US 6 x .50 cal machine guns to 2 x 30mm Aden cannons.

The Australian version did not see action in Korea as did the US Sabre, this action was by Mustangs and Meteors of No. 77 Squadron RAAF. It served the RAAF as the main fighter from 1956 to 1973, being replaced by the Mirage 1110.

CAC Avon Sabre2017-04-202017-04-20https://www.darwinaviationmuseum.com.au/wp-content/uploads/dam_logo_web.jpgDarwin Aviation Museumhttps://www.darwinaviationmuseum.com.au/wp-content/uploads/sabre_darwin.jpg200px200px
Categories
About Us
The Darwin Aviation Museum is an accredited tourism attraction with award winning displays. With 19 aircraft, 21 engines, 38 major displays including relics of crashed aircraft it depicts the aviation history of the Northern Territory.
Contact Us 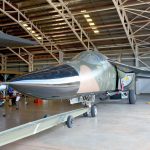 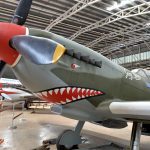