Aviation in the Top End of Australia

On 10 December 1919, a Vickers Vimy, G-EAOU, flown by Captain Ross Smith and his crew during the aviation landed at Fannie Bay on Darwin’s outskirts, winning the £10 000 prize from the Australian Government for the first flight from England to Australia in under 30 days.

From that time Darwin and the Northern Territory became the Northern Gateway to Australia and for many years Australia led the world in long distance pioneering aviation.

The ‘twenties and ‘thirties saw the record breakers and the air races – and all passed through Darwin. Bert Hinkler, Amy Johnson, Amelia Erhardt, Kingsford Smith and a host of others pioneered the routes that were later developed to fly travellers across the world.

The Territory fostered its own pioneers. Keith Langsford Smith, Harold Shepherdson, Vic Pederson, Eddie Connellan and its own flying doctor, Clyde Fenton – all pioneered aviation in remote regions. Airfields were developed in outback communities and at major centres. Many remain in use today.

World War II saw the Territory play a pivotal role in the fight against the Japanese. Sustained air attacks on Darwin and the Top End saw intense aerial combat leave its legacy in the roadside airstrips, camp sites and aircraft remains scattered over the region. Bombing and intruder operations from Territory airfields constantly harassed the enemy and destroyed infrastructure and morale.

After World War II Qantas used Darwin as a base for overnight stops for their Constellation aircraft flying the Kangaroo route to London, however, rapid post war development in technology saw the Territory otherwise isolated from international aviation. Later, when cyclone Tracy destroyed Darwin in December 1974, aviation played a vital role in evacuations, communications and relief efforts.

Darwin has hosted visits from many exotic aircraft and has been used as a base for tropical trials of aircraft such as the Concorde and the Boeing 777 and in 1982 Dick Smith landed in Darwin in his record breaking helicopter flight around the world.

Military air exercises involving a range of aircraft from many different countries are frequently seen in the air over Darwin and exotic civilian aircraft, such as the gigantic Antonov are often seen transiting through Darwin.

The Territory has since developed into a modern cosmopolitan community that epitomises the spirit of Australia. Whilst there are few scars of war and cyclone remaining, aviation will remain a vital part of the Territory’s strength in surmounting the tyranny of distance.

The Aviation Heritage Centre in Darwin has an impressive presentation of aircraft and displays depicting the Territory’s involvement in aviation, both civil and military, from the early pioneers and record breakers through World War II and the Jet age.

This historic DC-3 VH-MMA still flys out of Darwin

Aviation in the Top End of Australia2017-04-202017-05-25https://www.darwinaviationmuseum.com.au/wp-content/uploads/dam_logo_web.jpgDarwin Aviation Museumhttps://www.darwinaviationmuseum.com.au/wp-content/uploads/rosssmith.jpg200px200px
Categories
About Us
The Darwin Aviation Museum is an accredited tourism attraction with award winning displays. With 19 aircraft, 21 engines, 38 major displays including relics of crashed aircraft it depicts the aviation history of the Northern Territory.
Contact Us 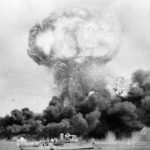